Eight over 80 - These proven business leaders are still going strong 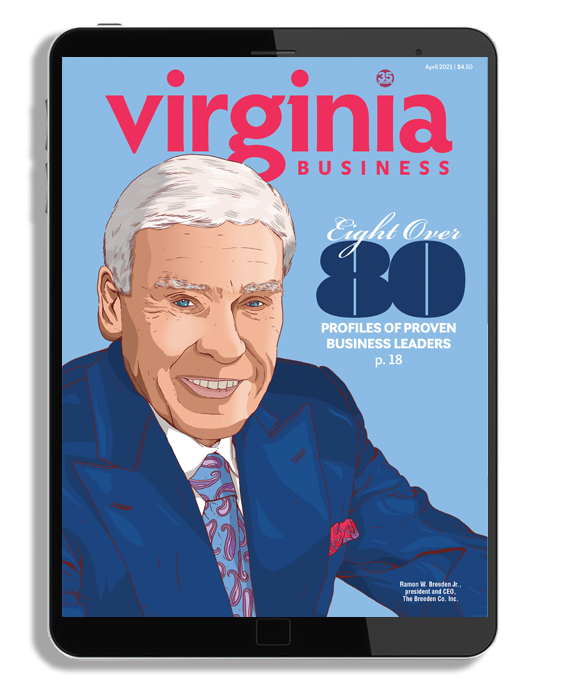 What keeps a person working at an age when most of us are happy to let others take care of business? These overachieving Virginians, all over age 80, have remained hard at work mostly for one or more of three reasons.

The first is being able to continue work with family. Retirement is rarely mandatory if you or your progenitors founded the company, which is the case for many of these dynamos.

The second is their desire to make their communities a better place, whether through their businesses or charitable good deeds, but usually both.

And last, but certainly not least, most take undiminished pleasure in continuing to wheel and deal.

Meet eight outstanding octogenarian Virginians who aren’t yet done making their mark on the commonwealth.

“My hobby is really my business,” says Ramon W. Breeden Jr. “I’m thinking about it in the middle of the night.”

That level of intensity wouldn’t surprise anyone who has ever worked with the real estate magnate, who has been a go-getter from the get-go. The Richmond native grew up in modest circumstances and went to the University of Virginia on a baseball scholarship. When his parents couldn’t afford to keep him in school, Breeden wasn’t deterred, taking on odd jobs to finance his own education. He began his career as a math teacher but, desiring to be in charge of his own destiny, Breeden soon turned to real estate development and mortgage financing, founding The Breeden Co. in 1961.

In the 60 years since, The Breeden Co. has owned, managed or developed more than 15,000 apartments, 1,700 single-family homes and 2 million-plus square feet of retail and office space, mostly in Virginia. It now focuses on high-density, mixed-use projects, and its business continues to expand at a rate of 12% to 15% annually, says Breeden, who continues to work full time. “Why not?” he says about his schedule. “I’m healthy. I’m fit.”

Breeden’s son, Torrey, has worked with him in the family business for more than 20 years.

In his down time, Ramon Breeden likes to fly and still pilots his company’s corporate airplanes and helicopters. Over the years, he also served on the board of the former Commerce Bank in Virginia Beach and was a director of Branch Banking & Trust (BB&T) Co. of Virginia (now part of Truist Financial Corp.).

He also has remained involved with higher education, variously serving U.Va. as a member of the McIntire Foundation Board and the McIntire Advisory Board. Some of his considerable energies have gone into supporting his local SPCA and United Way, as well. “I never think about doing more,” Breeden says of the prodigious number of things he already does. “I think about doing [it] the right way.”